BRUSSELS — After three years of fund-raising and renovations, the founders of a contemporary art museum housed in a converted brewery in the Molenbeek district here were eagerly anticipating their grand opening on March 23.

But those plans were upended on March 22, when suicide bombers struck the Brussels airport and a subway station, killing 32 people and paralyzing a city already reeling from revelations that some of the deadliest terror attacks in Europe had been carried out by homegrown extremists, many from Molenbeek.

Officials at the museum, the Millennium Iconoclast Museum of Art, or MIMA, canceled the opening. They agonized over whether art lovers would venture across the Charleroi canal into the heavily Muslim and immigrant neighborhood to view what it calls “culture 2.0” — art from subcultures such as tattooing, graffiti, surfing and skateboarding.

They needn’t have worried. When MIMA opened on April 15, the lines snaked along the waterfront, with 4,000 people visiting that weekend. And the attacks, the founders say, have only sharpened the museum’s resolve to forge connections with young people in Molenbeek.

“When I bought this property eight years ago, people thought this project was mad because Molenbeek was a no-go zone,” said Jean-Paul Pütz, a developer who bought the building with the idea of re-establishing a brewery there. On opening day, he wept when he saw the lines, he said. “What kind of impact can it have?” he said. “It’s just a small piece, a very modest piece of hope.”

The four-story brick museum, a former malt house for Belle-Vue Kriek beer built in 1916, anchors a gentrifying strip of artists’ studios, youth hostels and cafes in an area once known as Little Manchester for its warehouses and factories. It is just a short walk from a parallel universe within Molenbeek of halal butcher shops, teahouses and Middle Eastern boutiques where voices rise from the noisy sidewalks in Arabic, French and Moroccan Darija, and many women are veiled in niqabs. 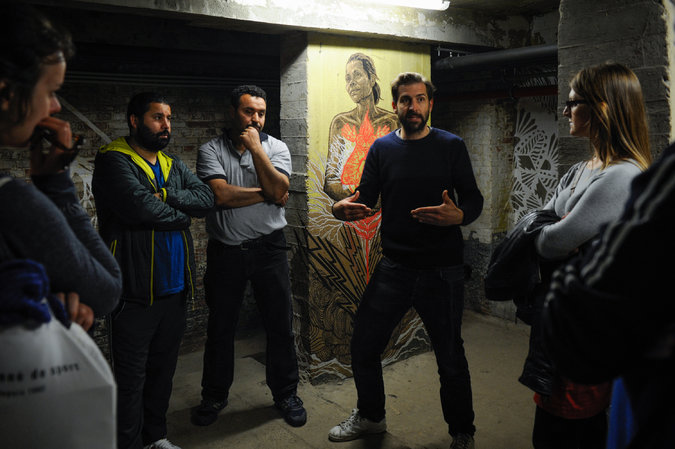 Raphaël Cruyt, one of MIMA’s founders, giving a tour of an exhibition at the museum to members of the nearby Brussels Boxing Academy. CreditCapucine Granier-Deferre for The New York Times

The museum’s facade is still laced with huge letters of white, yellow and blue graffiti. It will stay there, said Raphaël Cruyt, the owner of a contemporary art gallery and a Molenbeek resident who is one of the museum’s four co-founders, because “we won’t erase what the street has left there with its own rules.”

To attract young people from the neighborhood of about 100,000 people, the museum’s founders have sought to form alliances with schools and have taken steps to create a cultural exchange with the nearby Brussels Boxing Academy.

The academy boasts that it has trained five national champions this year, but over the past five years it has also lost a handful of boxers to fighting in Syria for the Islamic State. A former member, Ahmad Dahmani, 26, was arrested in November in Turkey and imprisoned on suspicion of conducting reconnaissance for the Nov. 13 Paris attacks.

Mr. Cruyt has visited the gym several times since MIMA opened. On a recent trip he spoke to the boxers, gathered near red punching bags, and invited them on a tour, describing how the museum was highlighting urban art that often reflects issues of personal rebellion and identity.

Afterward, he said he had no idea how many of them would come to see the first exhibition, “City Lights,” and its works by Brooklyn artists, including the duo Faile, whose spinning wood prayer wheel is carved with the words, “art is a lie that tells truth,” a sentiment attributed to Picasso.

Mr. Cruyt and his wife, Alice van den Abeele, along with Michel de Launoit, an entrepreneur, and his wife, Florence, started developing the project in 2013. Some people warned the developers that the idea was unworkable because of its location.

“It’s a bit silly, but magnificent because you have to dare to come here,” said Ann Gilles-Goris, a councilwoman in Molenbeek. “They believe in the place and they want to bring new life here.” 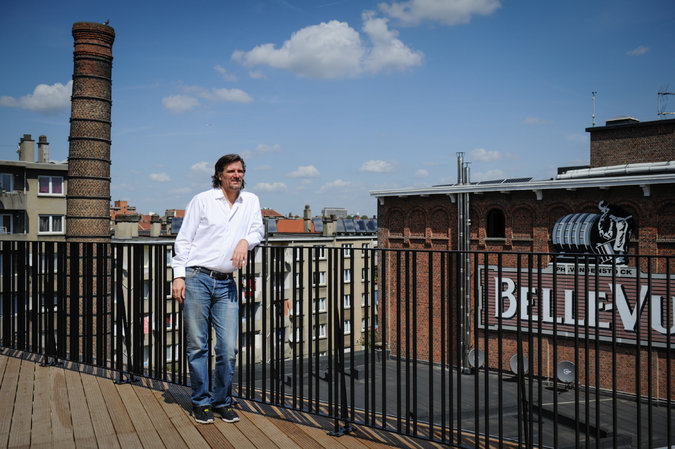 Michel de Launoit, one of the four founders of MIMA, on the roof of the museum. ”It’s a joint adventure,” he said, “and maybe we were a little naive when we started. We don’t have a foundation behind us. But we are united together and will continue this adventure no matter what happens.”CreditCapucine Granier-Deferre for The New York Times

Unlike many private museums that are financed by a single powerful collector, MIMA, which cost 18 million euros to build (about $20 million), relies on a network of backers. Seven collectors contributed works and money to build a permanent collection, while others have made loans. Corporate partners furnished supplies and insurance for artworks and regional governments contributed seed money. An association of about 200 private sponsors augment revenue from ticket sales, a restaurant and space rentals. The museum’s annual budget is about 600,000 euros.

“Our concept is the reverse from the usual private model,” Mr. Cruyt said. “We are trying to create a structure for a museum from the bottom up.”

Last month a handful of boxers and trainers visited a cavernous room devoted to an installation by the Brooklyn artist Maya Hayuk. Long windows facing central Brussels were tinted rose and yellow, and the walls were covered with lush red and blue paint in geometric patterns.

Mohammed Idrissi, a trainer, struck a “Rocky”-like pose and punched the air as a friend took his photograph. Since the visit, he has started a project with the museum in which the boxers will create videos about their lives and Molenbeek.

A fellow trainer, Tom Flachet, said the visit was the start of an effort “to open the minds of boxers who have a lot of false ideas about museums and art in general.” He added, “What interests me is that you can bring people into another world and aid their personal development.”

It is critical to foster such cultural exchanges to counter the isolation that can lead to an interest in radical extremism, he said. About five years ago, he said, the gym started to hear about arrests of former boxers on their way back from Syria, first a pair of brothers in Turkey and then a set of three brothers, including one just 14 years old.

One problem, he said, is that many young men from Molenbeek do not feel accepted by broader Belgian society. But some social programs have made a difference. He said that a number of the boxers participated in a theater project sponsored by a nonprofit group; the program created a “rupture” with their daily routines that prompted some to discover hidden talents.

At the gym, before the training exercises began, Malik M’bai, a 27-year-old boxer, said he believed that MIMA could help reshape Molenbeek’s reputation. “With the negative image that Molenbeek has now, the museum demonstrates that people are doing good,” he said. “It’s not only what we see on television. There is another side to Molenbeek.”