Why Brussels is the new Berlin

For decades, Europe’s buttoned-up political center had a reputation for stodginess and chilliness. No longer: Brussels has quietly emerged as one of the continent’s most exciting creative hubs.

As the battleground for debates over debt limits and currency crises since it became the eurozone’s capital in 1999, Belgium’s largest city is sometimes seen as the checkbook-balancing foil to freewheeling Antwerp 30 miles north. But in recent years, artists, upstart architects, independent hoteliers and fashion designers from across the continent have relocated in such numbers as to spark the inevitable ‘‘new Berlin’’ moniker — and have put down roots in the form of art galleries, concept shops and two lovely boutique hotels.

For these artists and designers, Brussels’ appeal comes down to both the practical — cheap rent — and the attitudinal. ‘‘I love Paris, but life is probably easier in Belgium. People are very open and innovative,’’ says Isabelle Thiltgès, a sculptor who recently returned to her native Brussels from Paris, where she lived for 30 years. ‘‘They’re a bit ahead of the rest of Europe.’’ Another draw is its location, within two hours by train from Paris, London, Cologne and Amsterdam. ‘‘Berlin is an island unto itself, while Brussels’ location makes it an attractive place for artists to take residency and for collectors to pass through on tours of Europe,’’ says Louis-Philippe Van Eeckhoutte, director of Office Baroque, an art gallery that relocated from Antwerp in 2013. ‘‘It’s not as busy as Paris or as international as London, but it has a big, open scene of galleries, artists and curators’’ — so much so that the New York-based Independent art fair is launching a Brussels edition in April 2016. Here, some of our favorite places. 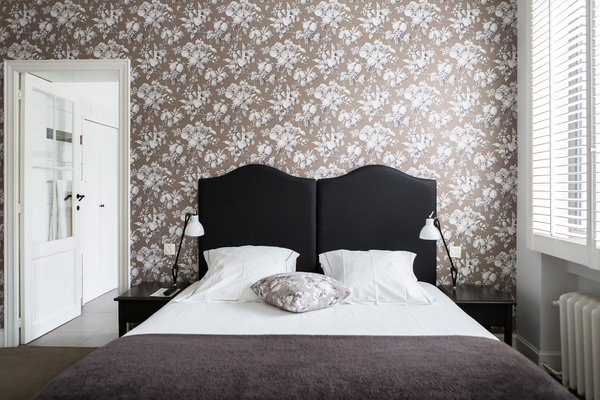 A guest room in the new hotel Made in Louise. CreditFrederik Buyckx

Located in the southern district of Ixelles (home to an ever-growing number of art galleries and stores), this hotel feels like the modern answer to a B&B. Redone by a brother-and-sister team in 2012, its 48 rooms are all decorated differently (the most memorable is wallpapered in a hand-painted blue floral print); there’s a billiards room with a white-painted pool table; and the lobby-cum-living room has parquet wood floors, armchairs clustered around a fireplace and an honesty bar. 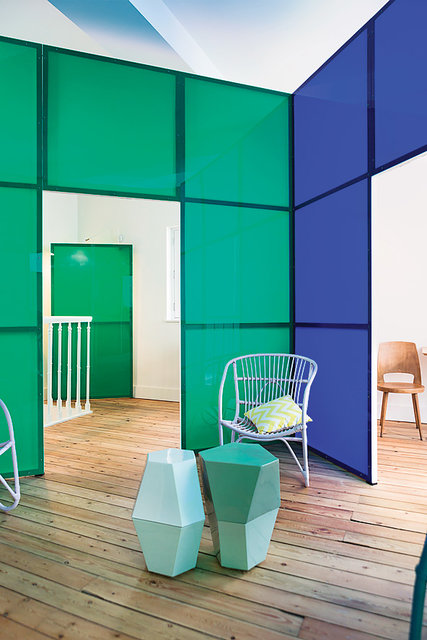 The Hôtel des Galeries mezzanine, with its geode-shaped ceramic tables, designed by the owner’s daughter.CreditFrederik Buyckx 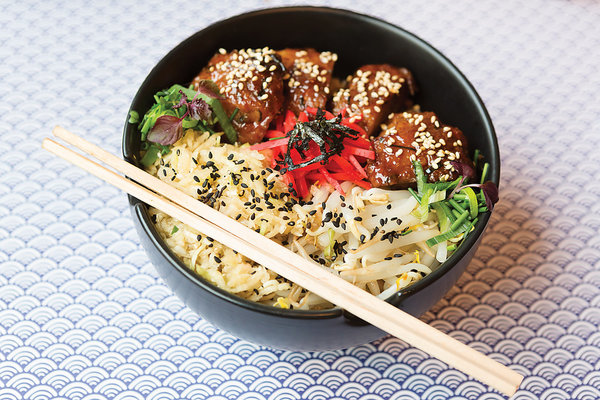 Brussels-born brothers Alexis and Arnaud Mestdag were so excited by the gyoza they ate on a 2014 trip to Tokyo that they spent a year perfecting their own versions of the dumpling. In April they launched Takumi, a restaurant near the lively Place Flagey, which almost immediately filled with double-kissing young Belgians ordering gingery pork gyoza and tsukune, a chicken meatball donburi served with marinated cabbage. The brothers’ next move is beer: They’ve enlisted a cousin to develop their own Japanese-style brew. 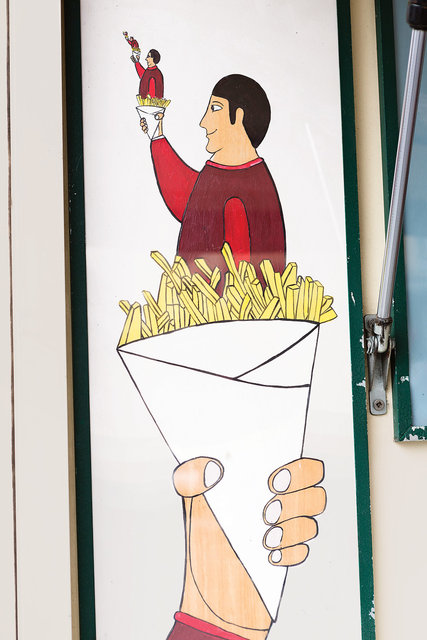 Frit Flagey is one of the best places to get Brussels’ signature double-fried frites, which come topped with mayonnaise or andalouse, a traditional Belgian sauce.CreditFrederik Buyckx

It’s impossible to choose a favorite place for Belgium’s famous double-fried frites, but this kiosk in the busy Place Eugène Flagey is certainly among the best. Its cones of fries come topped with dollops of mayonnaise or andalouse, a traditional Belgian sauce made from mayonnaise, tomato paste and peppers. The service is neither speedy nor friendly; expect a half-hour wait. Place Eugène Flagey, Ixelles. 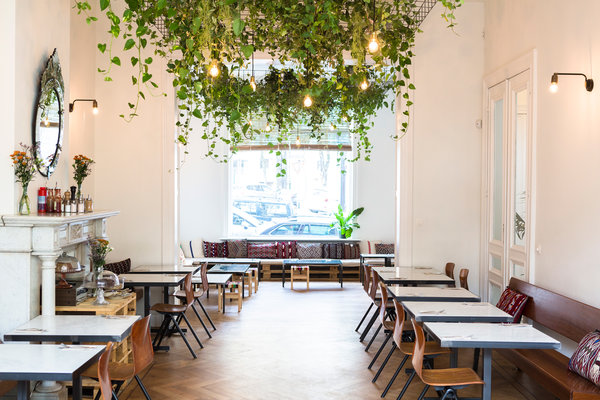 Brussels loves a good concept shop, and equally, all things organic, ethically sourced and sustainable. Hence this shop, restaurant, beauty parlor and spa in a 19th-century townhouse that retains its parquet wood floors and grand marble fireplaces — but reflects its newfound green ethos with plants hanging from the ceilings and mounted on the walls. Start the day with a blow dry at the first-floor beauty counter, then share the avocado toast and gluten-free chocolate cake over lunch on the terrace, before picking up jars of truffle mayonnaise and organic face cream by Belgian brand CÎME on your way out. 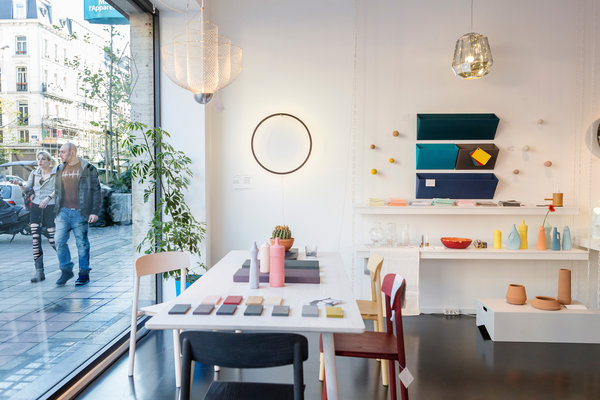 A five-minute walk from the gleaming guildhalls of the Grand Place, this year-old, bright-lit design store is owned by an art dealer who’s arranged the shop to resemble an apartment. There’s an ash-wood dining table set for dinner, French ombré bedsheets and Belgian- and Swiss-designed wood shelves holding homewares and objets d’art like coral-shaped resin vases and bowls cast with fruits and vegetables so their interior cavities have the shape and texture of cantaloupes, cabbages and cauliflowers. 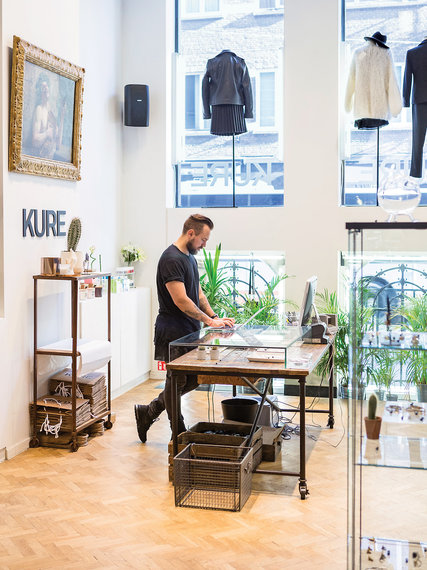 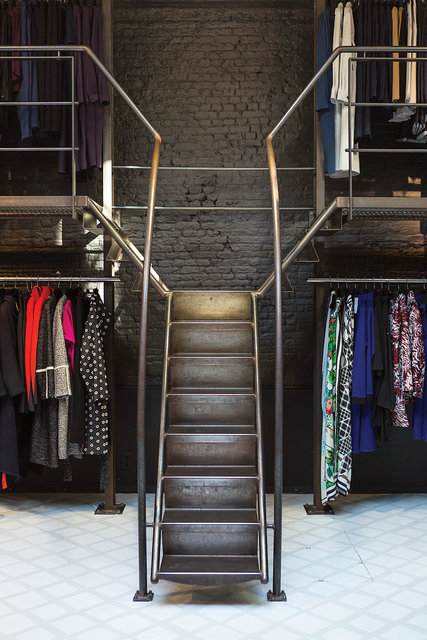 Stijl has been selling clothes by Belgian designers for over 20 years. CreditFrederik Buyckx

The original temple to Belgian fashion design since 1984, this store spawned the dozens of boutiques that now surround it on Rue Antoine Dansaert. The shop stocks only about a dozen women’s designers, most of them Belgian, with clothes hanging on black velvet hangers and sitting on simple white shelves; its stark black-and-white interior doesn’t distract from its selection of black dresses, sequined sweaters and floral-print jackets by some of the country’s best-known designers (Dries Van Noten, Ann Demeulemeester, Veronique Branquinho), along with pieces by newer names like Sofie d’Hoore, who’s beloved in Brussels for her easy-wearing, tentlike dresses. There’s also a men’s store around the corner on Place du Nouveau Marché aux Grains. 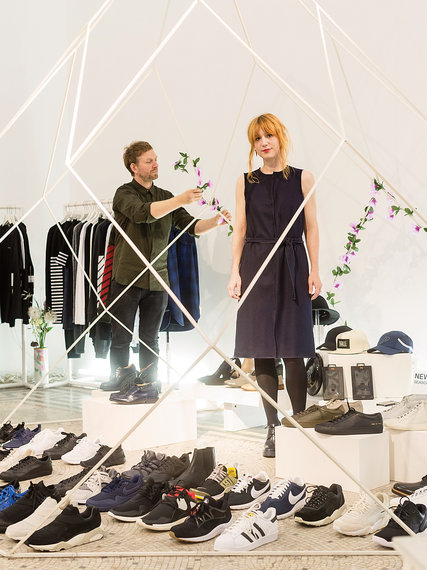 The concept shop Hunting and Collecting changes its look every year.CreditFrederik Buyckx

The height of trendiness when it opened in 2010, this concept shop can take credit for Brussels’ current wealth of gallery-cum-boutiques. Its owners, a former fashion editor and an event producer, treat it like a movie set that they overhaul every year. But regardless of the thematic inspiration — from après-ski to outer space to a winter garden — they offer a wide range of styles, from avant-garde to streetwear: Gosha Rubchinskiy-printed sweatshirts, 1970s-style patent-leather platforms by French designer Stephane Kélian and neoprene separates from the Paris-based Cédric Charlier. And every Thursday through Saturday, a young florist makes and sells bunches of flowers in the front window.

Why is Brussels such a paradise of vintage clothing shops? According to Isabelle Bajart, the owner of this popular second-hand boutique, it’s because ‘‘we’re right in the middle of Europe, so people just leave a mark.’’ Her store, located on the ground-floor of a three-story home, is full of hard-to-find and pristine designer clothes: Chanel jackets, Dolce & Gabbana tops and Dries Van Noten dresses — plus suede jackets, trenchcoats and bright printed dresses from the ‘60s, ‘70s and ‘80s. 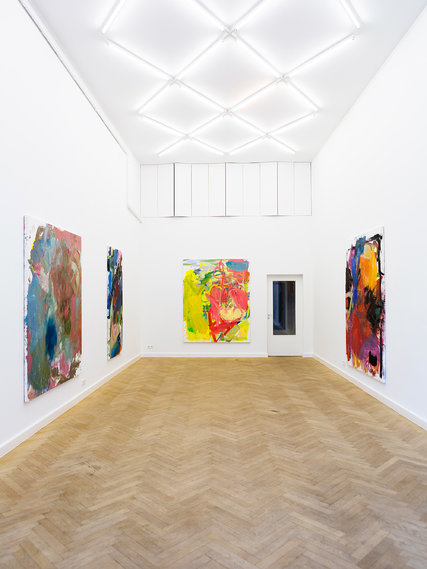 This contemporary gallery moved from Antwerp to Brussels in 2013, setting up in a former brewery in the Dansaert district, and in September, it expanded into a second location near the Bozar, the city’s fine arts center. Both spaces show established and emerging artists with ties to Modernism: The original Brussels gallery recently hosted a solo exhibition by the Los Angeles-based artist Michael Rey — a collection of oil-painted Plasticine panels cut into unusual flat shapes — while Anke Weyer’s colorful, richly textured abstract paintings were the subject of the new location’s inaugural show.